Global climate change is not about the weather in one's immediate vicinity as the evening news in the U.S. seems to imply by running a segment on weather happening somewhere in the U.S. most every night.

Methane is seeping from arctic tundra and at the ocean floor off the coast of North America as well as from millions of abandoned gas and oil wells dotted across the United States.

Human activities are changing the chemistry of the oceans and the atmosphere, disrupting nutrient cycles that circulate necessary nutrients (e.g. nitrogen and phosphorus) that all living things depend upon, increasing ocean acidification with CO2 beyond which coral (the foundation upon which are based, space for space, the planet's most productive ecosystems) may not be able to synthesize it's calcium carbonate skeletal structure.

Along with CO2, methane, and ocean acidification the global GDP has increased markedly since 1950 as graph (article below) shows. At the same time wealth has become concentrated in fewer and fewer hands as according to this Oxfam study (see below) the top 1% will control more wealth than every other human being by 2016!

So since 1950 all this so-called "development", the new wealth that's been created has been siphoned-off by a relative handful of capitalists. The environmental destruction and devastation that has accompanied this wealth production has only benefited a tiny minority. The vast majority are sinking further into poverty and are the one's who will suffer most from the devastating effects of climate change, ocean acidification, sea level rise, ecological destruction, etc.

Scientists have been researching and debating climate change and atmospheric CO2 levels at least as far back as the 1800's. Through the 1960's atmospheric CO2 levels were definitively shown to be increasing. (see: http://en.wikipedia.org/wikiHistory_of_climate_change_science) But the consumption/combustion of fossil fuels has continued to increase year after year up until today.

This poisoning and destruction of the biosphere to benefit a tiny fraction of the human population.

Date: January 15, 2015
Source: International Geosphere-Biosphere Programme
Summary: Human activity, predominantly the global economic system, is now the prime driver of change in the Earth System (the sum of our planet's interacting physical, chemical, biological and human processes), according to a set of 24 global indicators, or 'planetary dashboard.'

Human activity, predominantly the global economic system, is now the prime driver of change in the Earth System (the sum of our planet's interacting physical, chemical, biological and human processes), according to a set of 24 global indicators, or "planetary dashboard," published in the journal Anthropocene Review (19 January 2015). 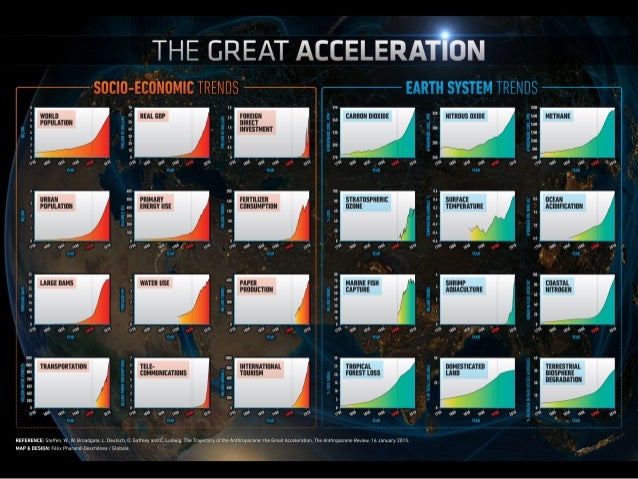 The research charts the "Great Acceleration" in human activity from the start of the industrial revolution in 1750 to 2010, and the subsequent changes in the Earth System -- greenhouse gas levels, ocean acidification, deforestation and biodiversity deterioration.

"It is difficult to overestimate the scale and speed of change. In a single lifetime humanity has become a planetary-scale geological force," says lead author Professor Will Steffen, who led the joint project between the International Geosphere-Biosphere Programme (IGBP) and the Stockholm Resilience Centre.

"When we first aggregated these datasets, we expected to see major changes but what surprised us was the timing. Almost all graphs show the same pattern. The most dramatic shifts have occurred since 1950. We can say that around 1950 was the start of the Great Acceleration," said Professor Steffen, a researcher at the Australian National University and the Stockholm Resilience Centre.

"After 1950 you can see that major Earth System changes became directly linked to changes largely related to the global economic system. This is a new phenomenon and indicates that humanity has a new responsibility at a global level for the planet," he added.

Co-author IGBP Deputy Director, Dr Wendy Broadgate said, "The Great Acceleration indicators allow us to distinguish the signal from the noise. Earth is in a quantifiably different state than before. Several significant Earth System processes are now driven by human consumption and production."

Another co-author, Dr Lisa Deutsch, Senior Lecturer at the Stockholm Resilience Centre notes that: "Of all the socio-economic trends only construction of new large dams seems to show any sign of the bending of the curves -- or a slowing of the Great Acceleration. Only one Earth System trend indicates a curve that may be the result of intentional human intervention -- the success story of ozone depletion. The levelling off of marine fisheries capture since the 1980s is unfortunately not due to marine stewardship, but to overfishing."

The findings provide strong evidence that in recent decades key components of the Earth System have moved beyond the natural variability exhibited in the last 12,000 years, a period geologists call the Holocene. The Holocene, Latin for "entirely recent," began at the end of the last ice age and provided the stability for agriculture to develop, leading eventually to townships and cities to flourish.

The Great Acceleration trends support the proposal that Earth has entered a new geological epoch, the Anthropocene, coined by researchers Paul Crutzen and Eugene Stoermer in 2000. Since then, the onset of the Anthropocene has been keenly contested by geologists, Earth System scientists and others, even though the term has not yet been formalised by the International Commission on Stratigraphy. Some say the dawn of agriculture 10,000 years ago -- the Neolithic Age -- is a likely candidate. Others say the industrial revolution, around the late 1700s.

The new paper argues that, "Of all the candidates for a start date for the Anthropocene, the beginning of the Great Acceleration is by far the most convincing from an Earth System science perspective. It is only beyond the mid-20th century that there is clear evidence for fundamental shifts in the state and functioning of the Earth System that are beyond the range of variability of the Holocene, and driven by human activities and not by natural variability."

Furthermore, choosing the beginning of the Great Acceleration leads to a possible specific start date: when the first atomic bomb was detonated in the New Mexico desert on Monday 16 July 1945.

"Radioactive isotopes from this detonation were emitted to the atmosphere and spread worldwide entering the sedimentary record to provide a unique signal of the start of the Great Acceleration, a signal that is unequivocally attributable to human activities," the paper reports.

The research explores the underlying drivers of the Great Acceleration: predominantly globalisation.

The bulk of economic activity, and so too, for now, the lion's share of consumption, remain largely within the OECD countries, which in 2010 accounted for about 74% of global GDP but only 18% of the global population. This points to the profound scale of global inequality, which distorts the distribution of the benefits of the Great Acceleration and confounds international efforts, for example climate agreements, to deal with its impacts on the Earth System. However, the paper shows that recently, global production, traditionally based within OECD countries, has shifted towards BRICS nations -- Brazil, Russia, India, China and South Africa. Moreover, the mushrooming middle classes in BRICS nations are driving greater consumption here too.

Coinciding with the publication of the Great Acceleration indicators, researchers also led by Professor Steffen have published a new assessment of the concept of "planetary boundaries" in the journal Science. The international team of 18 scientists identified two core planetary boundaries: climate change and "biosphere integrity." Altering either could "drive the Earth System into a new state." The planetary boundaries concept, first published in 2009, identifies nine global priorities relating to human-induced changes to the environment. The new research confirms many of the boundaries and provides updated analysis and quantification for several of them including phosphorus and nitrogen cycles, land use and biodiversity.

The original 24 indicators were published in the first IGBP synthesis in 2004, when Professor Steffen was IGBP Executive Director. The term 'Great Acceleration' was not used until 2005 at the Dahlem Conference on the history of the human-environment relationship, which brought together many IGBP scientists. This new research is part of IGBP's final synthesis, which will be completed in 2015.

The International Commission on Stratigraphy has set up a working group to analyse the validity of the Anthropocene claim.

Story Source:
The above story is based on materials provided by International Geosphere-Biosphere Programme. Note: Materials may be edited for content and length. Journal Reference:
Will Steffen, Wendy Broadgate, Lisa Deutsch, Owen Gaffney, and Cornelia Ludwig.The trajectory of the Anthropocene: The Great Acceleration. The Anthropocene Review, January 16, 2015 DOI: 10.1177/2053019614564785
http://www.sciencedaily.com/releases/2015/01/150115142223.htm

Extreme inequality isn't just a moral wrong. We know that it hampers economic growth and it threatens the private sector's bottom line.

The combined wealth of the richest 1 percent will overtake that of the other 99 percent of people next year unless the current trend of rising inequality is checked, Oxfam warned today ahead of the annual World Economic Forum meeting in Davos.

The international agency, whose executive director Winnie Byanyima will co-chair the Davos event, warned that the explosion in inequality is holding back the fight against global poverty at a time when 1 in 9 people do not have enough to eat and more than a billion people still live on less than $1.25-a-day.

Byanyima will use her position at Davos to call for urgent action to stem this rising tide of inequality, starting with a crackdown on tax dodging by corporations, and to push for progress towards a global deal on climate change.

Wealth: Having It All and Wanting More, a research paper published today by Oxfam, shows that the richest 1 percent have seen their share of global wealth increase from 44 percent in 2009 to 48 percent in 2014 and at this rate will be more than 50 percent in 2016. Members of this global elite had an average wealth of $2.7 million per adult in 2014.

Of the remaining 52 percent of global wealth, almost all (46 percent) is owned by the rest of the richest fifth of the world's population. The other 80 percent share just 5.5 percent and had an average wealth of $3,851 per adult - that's 1/700th of the average wealth of the 1 percent.

Winnie Byanyima, Executive Director of Oxfam International, said: "Do we really want to live in a world where the one percent own more than the rest of us combined? The scale of global inequality is quite simply staggering and despite the issues shooting up the global agenda, the gap between the richest and the rest is widening fast.

"In the past 12 months we have seen world leaders from President Obama to Christine Lagarde talk more about tackling extreme inequality but we are still waiting for many of them to walk the walk. It is time our leaders took on the powerful vested interests that stand in the way of a fairer and more prosperous world.

"Business as usual for the elite isn't a cost free option - failure to tackle inequality will set the fight against poverty back decades. The poor are hurt twice by rising inequality - they get a smaller share of the economic pie and because extreme inequality hurts growth, there is less pie to be shared around."
Read entire of article: http://www.oxfam.org/en/pressroom/pressreleases/2015-01-19/richest-1-will-own-more-all-rest-2016